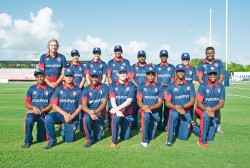 Cayman Cricket is proud to announce that their U19 squad will be representing the Cayman Islands in the ICC Americas Regional U19 World Cup Qualifiers in Toronto, Canada.  The team and support staff will fly from Owen Roberts Airport on 06 July in readiness for the qualifiers which will be held between 08 to 16 July 2019.  There will be no opportunity to ease in gently with the first match being played against USA on the first day of the event. All the matches will be played at the Maple Leaf Cricket Ground in King City.

Members of the squad went through a tough selection process where they displayed their cricketing prowess during rigorous training sessions held at the Smith Road Oval, facilitated by Head Coach and Technical Director Peter Anderson.

Mr Anderson is no stranger to stiff competition himself.  An ex-Australian All Star, Peter accompanied Cayman's senior men's team to Argentina in 2018 where they successfully progressed through to the ICC Americas Regional T20 qualifiers for the ICC T20 World Cup to be held in Australia in 2020.   The Under 19 team has a tough act to follow but Peter is confident the team will be well prepared and ready for the challenge.

“The average age of this squad is pretty young at 15.  It is really encouraging to be able to have such a youthful team ready to represent Cayman in this competition. These players are the backbone of youth cricket in Cayman and I have no doubt they will go on to represent the country on future senior overseas tours” said Peter Anderson.

He added “the players have been committed to attending training sessions and to being the absolute best that they can be in readiness for these qualifiers, and I am confident that they will do very well indeed against the stiff competition”.

International law firm Mourant, who have been generous sponsors of Cayman Cricket in recent years, are sponsoring the team's travelling and match uniforms for the tournament.

Hayden Isbister, Mourant's Cayman Managing Partner said, “We're really excited and proud to see the Under 19s heading to Canada. This not only gives them a unique opportunity to fly the Cayman flag internationally, it also brings them individually and as a team a different perspective on the sport. Cayman Cricket has worked hard with the schools’ cricket programmes to make the sport accessible to young children in the Cayman Islands and we are delighted to be working with them to continue making this happen.”

The line up for this tournament is:

The team will be accompanied on the trip by Manager, Marlon Hoyte and Head Coach Peter Anderson.