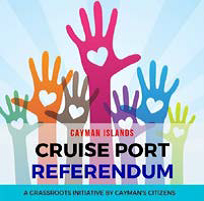 Campaigners for a referendum on the port project said Government's announcement on the Preferred Bidder was an expected part of the process and welcomed government’s acknowledgment that no contract should be finalized until after the petition verification process is complete.

Cruise Port Referendum (CPR) Cayman, said it was now incumbent on Government to reveal the full details about the cost of the project, how it would be funded and the revised designs. Government has previously indicated that it was not able to give these details while the procurement process for the Proposed Cruise Berthing Facility and Upgraded Cargo Area was taking place.

It is also understood that the winning bidder of the Finance, Design, and Build contract will be responsible for financing an update to the Environmental Impact Assessment on the final design. The details of how that process will take place and other aspects of how the project proceeds are expected to be revealed Monday.

In welcoming Government's announcement, CPR Cayman added again that the Government should also not sign any binding contracts or contracts with penalty, until after the referendum result to avoid paying contract breach penalties with public funds.

As a grassroots community organisation CPR Cayman was / is seeking more information in an effort for Caymanians to be able to make an informed decision on this very substantial project that will not only affect our marine environment but also our Territory’s finances, social fabric and quality of life.

We look forward to the Government’s Press Conference on Monday when they are expected to reveal to the Public, all and complete details of this Project such as but not limited to;

a) the total cost of the project
b) the detailed financing model including cash and inkind commitments, including contract duration and required increase in cruise passenger numbers
c) the revised designs that have been agreed upon
d) the specifics of the updated Environmental Impact Assessment process, including public consultations, geotechnical and carrying capacity studies and the entities that will carry out these studies

e) the related upland development, and the
f) complete job list of the new 999 full time positions the Government has stated that the project will create

h) the plan for 3 years of construction: traffic, cruise arrivals, tour operators and businesses unable to operate during construction and/or after the build

Mario Rankin of CPR Cayman said supporters of the petition should not be discouraged by the announcement. He said it was an expected part of the ongoing process and, based on the early results of the verification process for the petition, he believes a referendum is now inevitable.

“The work that everybody put in has borne fruit and I am convinced that the verification process will be completed and that people will get their chance to vote on this in a referendum.”

We understand that Supporters of the People’s Initiated Referendum may be feeling discouraged by Friday’s Announcement. CPR Cayman would like to reassure each of you that by all indications as of today with the verification process, your referendum is inevitable.

In closing, we are encouraged that Government has for the first time acknowledged and have shown some level of respect towards the People’s Initiated Referendum by at least waiting for the Verification to be completed.