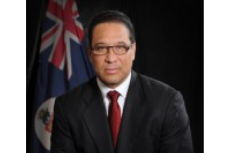 "I had a good, positive conversation this morning with Mr. Roper, and I look forward to welcoming him when he arrives on Monday," Mr. McLaughlin said. "I anticipate that Mr. Roper and I will quickly build a cordial and productive working relationship. I am pleased to have heard directly from Mr. Roper his eagerness about working in the Cayman Islands and to also have him provide first-hand information on his background and experience working with other Overseas Territories."

Lord Ahmad of Wimbledon wrote to the Premier on 19 October announcing Mr. Roper's appointment and thanked the Premier for offering advice on the qualities needed in a new governor. He said that he and the Foreign and Commonwealth Office took that advice on board in the appointment of Mr. Roper.

In his letter to Lord Ahmad on 24 September, the Premier noted that a new governor "should have a good knowledge of, and preferably experience of working with Overseas Territories. They will need to have an appreciation for the separate roles of the elected government and the Governor's Office and to be able to hit the ground running."

The Premier also suggested that the experiences of former Cayman Islands Governor Helen Kilpatrick be taken on board as part of the recruitment process for the new governor.

"This would, I believe, go a long way to giving us confidence that the process would give us someone who understands and respects the role of the Premier and the Government whilst also appreciating that Caymanians understand full well how to grow and keep our Islands safe and prosperous," he wrote to Lord Ahmad.

"I thank Lord Ahmad for the opportunity to provide advice on the qualities needed in the incoming governor. I am also grateful that, in speaking with Mr. Roper, he indicated he has had conversations with former Governor Kilpatrick with regards to her role and experiences when she served as governor of the Islands," Mr. McLaughlin said.

Mr. McLaughlin applauded Acting Governor Hon. Franz Manderson for his work in taking up the role in the absence of a UK-appointed governor.

"I look forward to continuing to work with him as Deputy Governor and with Mr. Roper as our new governor," he said.