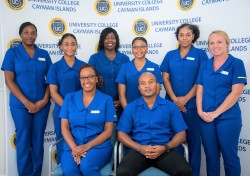 This fall, the eighth cohort of the University College of the Cayman Islands School of Nursing will begin its four-year course of studies. The school will also hold its seventh annual capping ceremony on Oct. 17.

Since its inception in 2013, the nursing programme has so far graduated three classes, all of which have had a high pass rate on their nursing board exams due to the Covid-19 pandemic, the most recent class of graduates will not be able to take their board exams until 2021, but programme director Terica Larmond said she expects the group to continued the exceptional trend the school has become known for.

As UCCI celebrates its 45th anniversary year, the campus is spotlighting some of its high-profile programmes that help illustrate its contribution to Cayman.

“The UCCI School of Nursing demonstrates just how much we can do in Cayman and the important role that local tertiary education plays in nation building,” said UCCI President and CEO Stacy McAfee. “Not only are Caymanian nurses able to train locally, but they can have an immediate impact by serving the community they know so well.”

The idea of having a Cayman-based programme turning out Caymanian nurses has its origins in 2009. Then-President Roy Bodden and Hazel Brown, the chief nursing officer for Cayman’s Health Services Authority, initiated the process.

Mark Scotland, chairman of the UCCI Board of Governors, was minister of health at the time and credited Brown’s tenacity for getting the programme off the ground.

“Her strong advocacy and support were certainly key factors that led to its creation,” Scotland said.

Larmond, who joined UCCI in May 2013 to welcome the first class that August, said she is pleased the nursing school has had an impact, producing homegrown registered nurses.

“I know for a fact that this programme has contributed considerably to the status of the university and what people see coming out of UCCI,” Larmond said.

Interest in the programme has only grown. “I’m always getting calls,” she said. “I even get calls from overseas.” This year, despite the pandemic, a cohort of 15 students, the largest since the programme’s inception, began its studies. One member of that class is UCCI’s fourth male student nurse.

While there is great interest in the programme, she said, it is sometimes a challenge finding enough students who are qualified to take on the curriculum. She sometimes works with prospective students for two years or more, making sure they are taking the appropriate prerequisite classes and achieving high enough grades to be able to enter the nursing programme.

The applicants often have external challenges such as working full-time jobs to support themselves. She’s dealt with a wide swath of prospective students, from high schoolers to one 55-year-old applicant.

She finds herself enmeshed in the lives of these prospects as well as the nursing students in the programme.

“I feel every pain they feel,” she said.

“There were many tears,” said Melleann McNickol, who graduated in 2018.

When those moments came, she said, she was thankful she was able to stay in Cayman to study nursing.  She had expected to have to travel overseas to pursue her dreams of being a nurse, but found out in her second year at UCCI about the newly formed nursing program. She was happy to stay local and have the support of her family.

“When things got really tough, I had my mom and dad there,” she said.

McNickol is an RN at the Pines retirement home. She enjoys the work, she said, but eventually hopes to go back to school to become a midwife.

That’s also what Kianna Rankin hopes to do, after working a few more years as an RN at the Health Services Authority, where she is currently working.

McNickol, who earned her degree in 2018, said she was only 17 when she started the program. She felt she was too young to study overseas, but from the time she decided to be a nurse, as a year six student, it seemed the only option.

When she found out about UCCI’s programme, “I was shocked and ecstatic. It was the best thing ever to be able to study locally.”

Both women encouraged others to do the same.

“It’s not going to be easy,” McNickol said, “but if three groups have (already) done it, you can do it too.”

While no major changes in the curriculum are expected in the coming year, delivering that curriculum has already proved to be a challenge due to the current coronavirus pandemic. In the spring semester, Larmond said, her students were in the midst of their clinical hours when social restrictions were put into place and local schools went to an online format.

Nursing students typically spend a certain number of classroom hours on theory. Those hours vary depending on the particular aspect of nursing they are studying. After that they spend time in the clinical setting practicing what they’ve learned.

COVID-19 restrictions, Larmond said, did not completely hamper the practical aspects of the programme. Some assessment simulations -- where nurses have to decide how to care for a theoretical patient based on a set of symptoms --  were done in a virtual setting. But much of what nurses do requires hands-on interaction.

Larmond said, with permission being from the University’s Executive Leadeship, theory coursework for the fall semester was completed during the Summer 2020 session. That created the opportunity for the students to return to the clinical setting at the start of the fall semester. They are in the process of completing the clinical practicums they missed earlier in the year along with the regular fall practicum.

COVID-19 has actually helped in one respect, Larmond said.

Past studies have shown that one of the weak areas in many hospitals is infection control. Nurses often don’t wash their hands frequently enough or take adequate care to avoid cross-contamination.

Larmond said COVID-19 has made the importance of those practices very clear.

“Even though COVID-19 is not written into the curriculum, (it) has pulled in these principles,” she said. “It has allowed us to start thinking some more about how we protect others as well as protecting ourselves. It’s a real eye-opener for the students.”

Often, the biggest eye-opener for students is how demanding the nursing programme is. Larmond says students sometimes feel like they can’t handle the workload.

“I say, ‘Others have been there and done it and so can you,’” she said. “I tell them, ‘It’s not going to come easy, but it’s going to come to an end and you’ll be that successful person that you wanted to be at nursing.’

“We push them hard,” she added. “But we do that because, who knows? God forbid, but one day you might be my nurse.”

She said that while the programme is focused on bolstering healthcare in Cayman, its focus is not geographically limited.

“Nurses travel the globe,” Larmond said.  “The team at the School of Nursing is preparing them to practice wherever needed.”

Because of that philosophy and because of the high pass rate its students have demonstrated on their board exams, UCCI’s nursing programme can stand up to scrutiny as one of the university’s top offerings, Larmond added.

“I am pleased that the nursing school has been able to provide opportunities for nurses to be trained to fill needs that exist here on island as well as elsewhere. The nursing school has also raised the profile of UCCI, particularly with the high success rate of its graduates.”

That success has been aided by partnerships, such as the one with Health City. Shomari Scott, Health City’s director of business development said the hospital has been involved with the nursing programme from the start.

“This ties into Health City’s vision to build a Caymanian medical work force for the future,” Scott said. “We have been pleased to see many of our healthcare explorers alumni go on to the UCCI School of Nursing to pursue their degrees.

One graduate from the UCCI’s first cohort Shianne Taylor is employed at Health City, and is the first graduate of the programme to be hired there.

“I’ve heard it referred to as a flagship programme,” she said. “Business outweighs us when it comes to numbers. Everybody knows Cayman is all about business. But now that this programme has moved out of its embryonic stage, we’ve shown what we can do.”

If you are interested in starting a Nursing career at UCCI, visit our website at https://ucci.edu.ky, or set up an appointment with our admissions team by calling +1 (345) 623 8224 or emailing admissions@ucci.edu.ky