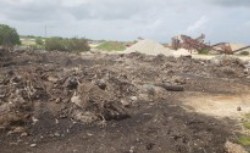 GRAND CAYMAN (GIS) -- The Cayman Islands Fire Service and the Department of Environmental Health (DEH) confirm that a fire in a Bodden Town quarry that had been smoldering for the last three weeks was extinguished on Thursday, 18 October 2018. Following a slight delay to repair his excavator, the quarry owner had begun work on Wednesday, 17 October, to meet the terms of a Fire Service permit to store bulk combustible materials and an abatement notice from DEH. During this process, any flare-ups or fires unearthed by the excavation were immediately extinguished.

Served in early October the Fire Service permit required the owner to dismantle the substantial piles of rubbish that prevented officers from safely and immediately extinguishing the fire. Meanwhile, the abatement notice, filed in late September following a complaint from a member of the public, called for the owner to stop the smoke and have the site cleared of debris and fenced off. Both the permit and the notice required work to be complete by 22 October.

Fire officers have been conducting daily checks of the site since they were first notified in late September and say that recent rains had all but extinguished the fire, leaving only a deep-seated smolder under the very large piles and very little smoke. It is the site owner's intention to sieve the contents; use the ash on his farm, and transport the rest to the George Town Landfill. It is a requirement of the abatement notice to ensure that any waste transferred to the DEH landfill is no longer alight.

As a result of the remote location of the quarry, at the end of Lake Destiny Drive, the Fire Service says there was never a risk to the surrounding neighbourhood. At the same time, both departments routinely checked nearby homes to assess the reach of any smoke from the fire.