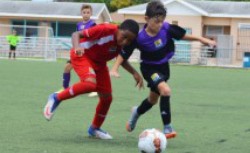 The Opening Rally is an exciting, fast-paced one-day tournament with games being a short 10 minutes per half with no off sides. Games must end with a winner. If games are tied at the end of the 20 minutes, penalties and sudden death penalties will decide the victor.

The first round of play is the group stage with schools being divided into three zones where schools play each other once in their respective zones. The top two top schools from each zone and the two best third place schools advance to the second round – the quarter finals, which is the first knockout stage. From the quarter finals, the semi finalists are decided with the resulting two winners advancing to the final and the two losers playing for third and fourth place.

CUC encourages fans of “the powerful game” and youth sports to make their way to the T.E. McField Sports Field (Annex Field) this Saturday to cheer on the youngsters.