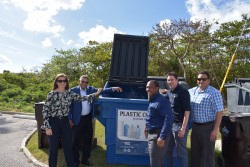 On Tuesday, Captain Eugene Ebanks, Councillor for Environment & Housing, officially opened an upgraded recycling depot in the district of North Side as part of the government's drive to provide more convenient recycling services for the residents of Grand Cayman.

The depot is located at the North Side Civic Centre and has been upgraded by the DEH. The location used to recycle cans only, now the site can be used for the recycling of glass, type 1 & 2 plastics as well as tin & aluminium cans.

Captain Ebanks lauded the DEH for this initiative. “I would like to thank the DEH for ensuring that as a country we are on the right path to addressing the matter of recyclable waste on our islands, both with educating our communities and ensuring that we do our part as a Ministry with ensuring that the service is effective in achieving the goal of recycling waste whenever possible, “Captain Ebanks stated.

The DEH began to expand the number of recycling containers following public interest and after observing an uptick in the public's use of its recycling depots during 2018.

As a result of its upgrading this depot, the DEH will increase to seven, the number of locations, outside of the George Town Landfill, where residents can recycle multiple items. Other depot locations include Kirk Market, Hurley's Grand Harbour and all branches of Foster's Food Fair.

Containers for recycling mixed paper and cardboard, type 1 & 2 plastics, tin & aluminium cans and glass/ceramic items are available at each of these depots.

DEH collectors empty recycling containers on Monday, Thursday and Saturday of each week.

The DEH urges members of the public to drop off only clean items and to remove plastic bags before placing them into the recycling containers.

Please call the DEH at 949-6696 for additional information about its recycling program. Individuals may also send an email to dehcustomerservice@gov.ky, visit the DEH’s website at deh.gov.ky, or message its Facebook page at www.facebook.com/DEHCaymanIslands.