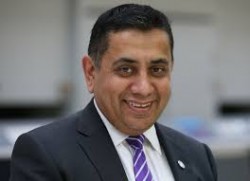 UK Minister of State, Lord Ahmad of Wimbledon will visit the Cayman Islands this week to take part in the Trade Summit which has been organised by the Cayman Islands Government and FCO and will include senior delegations from across the OTs.

The Minister will also attend a Joint Ministerial Council meeting on BREXIT and will hold bilateral talks with the Jamaican Prime Minister who will be in Cayman for celebrations to mark the 60th anniversary of the Cayman Islands constitution.

The three-day visit will include meetings with Cabinet and the Leader of the Opposition as well as a visit to Cayman Brac.

Royal Fleet Auxiliary Ship Mounts Bay will also be in port and the Minister will be on Seven Mile Beach to witness an exercise to land disaster relief equipment from the ship.

He will also review joint air operations between the Royal Navy helicopter and Cayman's new RCIPS helicopter, which was partly UK-funded under a Memorandum Of Understanding signed by Lord Ahmad and Premier Alden McLaughlin.    A visit to the Joint Marine Unit is also planned.

Governor Martyn Roper welcomed the visit: "Coming so soon after the visit by Their Royal Highnesses the Prince of Wales and Duchess of Cornwall, I am delighted that Lord Ahmad will make his second visit to the Cayman Islands.

"This week will be very busy with visits from a number of OT Premiers and First Ministers, Trade Representatives, The Prime Minister of Jamaica and the RFA Mounts Bay.

"The Trade Summit will explore areas where the UK and the Overseas Territories can work more closely together to develop export and inward investment opportunities.  Senior Representatives from the Department of International Trade and its business delivery partners in the USA and China will be present.

"It is also great that Lord Ahmad will be here to celebrate the 60th Anniversary of the Constitution and discuss cooperation on disaster management".