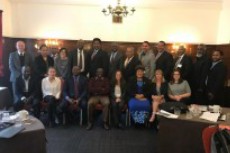 (GIS, Grand Cayman) - The Public Accounts Committee will strengthen its role to ensure government obtains best value for money in all expenditures using information gleaned at a public accounts symposium in London. Deputy Speaker Hon. Bernie Bush and Councillor Austin Harris attended the 6th Annual Public Accounts Committees Symposium and Workshop in London for delegates from Commonwealth countries and British Overseas Territories. “As the late British Prime Minister Margaret Thatcher once stated, the government has no money; it’s the people’s money,” said Mr. Harris. “It is therefore imperative that we spend the public’s money as prudently as possible and ensure that the people of the Cayman Islands are receiving the greatest value for their money.”

During the four-day symposium from 15 to 18 October, Mr. Bush and Mr. Harris met with leading practitioners in the public accounts field. The purpose was to better understand how PAC members can work with stakeholders to make certain that public spending and delivery of services is both highly effective and efficient.

“When the government pays for something, it actually means that the public is paying for it, and therefore we have a duty to ensure accountability,” said Mr. Harris. “The symposium was extremely beneficial in helping us understand the ways in which to implement best practices for government spending. PAC must hold all government entities accountable, and compliant with the highest of standards to safeguard the public purse.”

The event was also attended by delegates from Kenya, Ghana, the Solomon Islands, Australia, Tonga and the United Kingdom. The International Centre for Parliamentary Studies hosted the symposium.