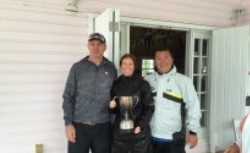 The Cayman Islands Sailing Club autumn season kicked off with the Annual J22 Governor’s Cup last weekend. Although fleet numbers were down this year, three boats of enthusiastic sailors showed up to race in North Sound.

In Race one, ‘Mayhem’ with Carl, Dave Schiedel (who is visiting from the UK) and Lisa had a great start and got on the right side of the shifting breeze. ‘Mayhem’ led the fleet around the first mark before Tomeaka McTaggart, Matt Diaz and Sam Dawson sailing ‘just leaving’ hauled them in to finish with the first win of the day. Unfortunately ‘Yahoo’ lost their spinnaker halyard in race two resulting in Peter Bridge climbing the mast and capsizing their boat to get the halyard back. ‘just leaving’ came away with four wins on day one. After close racing, ‘Yahoo’ with Bruce Johnson, Peter Bridge and Mark Edmunds claimed second place, with ‘Mayhem’ in third

Undeterred by the heavy rain, teams showed up on Sunday, but due to lightning squalls, the final races were abandoned, awarding the trophy to ‘Just Leaving’. A big thank you to Peta Adams, Denise Couch and Raph Harvey for race committee.

This weekend Bart’s bash will be taking place. Bart’s Bash is a global sailing race that takes place at venues all over the world in all classes of boats, from optimists to large cruising catamarans. For further information, please contact the CISC