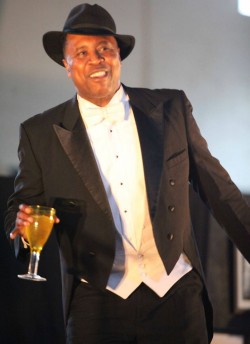 The Cayman National Cultural Foundation (CNCF) is bringing “The World is My Home – The Life of Paul Robeson” to Cayman for a three-night only performance at the end of March.  Described as the top one-man-show in the United States, Caribbean and Central America, “Paul Robeson” is written and performed by African-American actor Stogie Kenyatta and is about the life and work of Robeson, a singer, actor, athlete and activist who became famous both for his cultural accomplishments and his political activism.  Supported by the Ministry of Culture, the production is being put on in celebration of the International Decade for People of African Descent (2015–2024) as proclaimed by the UN General Assembly.  The show will take place at the Harquail Theatre for the public on 29, 30 and 31 March and three free private shows for High School students on 2 and 3 April.  The show is the final event on the 2019 Cayfest calendar.

Robeson (1898-1976) was a brilliant African American bass baritone concert artist and stage and film actor whose voice is forever linked to classic songs such as “Ol’ Man River”, “Were You There?” and “Lift Every Voice and Sing”.  Born to a father who was a preacher and former slave and a teacher for a mother, his academic and athletic achievements earned him a scholarship to Rutgers University where he graduated top of his class and valedictorian in 1919.  He then went on to receive a law degree from Columbia University and pass the New York State Bar in 1922, becoming the first Negro lawyer hired by a New York Law firm.  Robeson also established himself as one of the most important musical and dramatic performers of his day. The role of Joe and the song “Ol’ Man River” in Show Boat were written for his famous bass voice; Robeson originated the title role in Eugene O’Neill’s The Emperor Jones; and he became the first African American to play Othello on Broadway. By the late 1940s, Robeson’s artistic reputation was well established internationally, but it was surpassed by his reputation as a political activist.  He spoke out against the Holocaust, visited Warsaw ghetto in Poland; co-founded the Organization for African Unity (OAU) with W.E.B. Dubois; and pushed for the liberation of Africa.  Before he was blacklisted by the Joseph McCarthy’s House Un-American Activities Committee in 1950, he received numerous awards and a mountain in Moscow, Russia was named in his honour.

“CNCF is thrilled and honoured to bring this critically acclaimed show to the Cayman Islands. This is a significant coup for us.  “The Life Of Paul Robeson” is an entertaining, laugh out loud, music-filled show that still manages to touch on such serious, timeless and relevant topics as diversity, compassion and social justice,” said CNCF Artistic Director Henry Muttoo.  “The life and legacy of this extraordinary human being as portrayed by Stogie Kenyatta will awaken, enlighten and uplift the spirits of everyone who has the privilege of experiencing this performance.  I hope the public will take advantage of this unique opportunity to be educated and challenged to think about our common humanity.”

Jamaican born and Brooklyn bred, Stogie Kenyatta was classically trained at the Afro American Studio in Harlem, Henry Street Settlement and Al Fann Theatrical Ensemble and also studied Screenwriting and Political Science at the University of California.  He has numerous television credits from sitcoms, film and soap operas.  Kenyatta brings a unique interpretation to the stage and captures the essence of Robeson as he portrays 14 different characters and chronologically takes the audience through the life of history’s first black Renaissance Man.   The show covers the Harlem Renaissance with music from Duke Ellington, John Coltrane, Louie Armstrong, Fats Waller, Cab Calloway, Harry Belafonte and Paul Robeson himself and also highlights Robeson’s friendships with legendary figures such as Albert Einstein, W.E. Dubois and Langston Hughes.

“The World is My Home – The Life of Paul Robeson” performances will take place on 29, 30 and 31 March at 8pm nightly.  Tickets are $20 for adults and $15 for seniors and can be purchased at Funky Tang’s, Fosters Food Fair (Airport and Strand locations), Healthcare Pharmacy Grand Harbour and the CNCF office.  For more information call 949.5477 or visit www.artscayman.org.