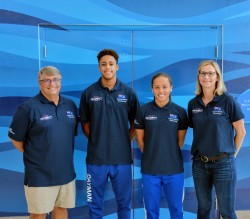 Newcomers to the major international swimming stage, Raya Embury-Brown and Jordan Crooks will be joining veterans Lauren Hew and Brett Fraser at the 18th Annual FINA Swimming World Championships. The championships which started on the 12th of July will run through to the 28th July.  Cayman’s elite swimmers will be hosted along with over 2,500 competitors from 194 countries at the ultra-modern Athletes Village in South Korea’s city of peace, Gwangju, next week.  The events will take place in the 50 meter pool at the Nambu University, Municipal Aquatics Center.

Hot off their success at Island Games in Gibraltar, Raya and Jordan are confident and ready to race alongside the world’s best swimmers. Raya will be swimming the 800m and 400m freestyle while Jordan will be racing the 200m and 100m freestyle.

Lauren and Brett having spent the early weeks of their summer training in the US are ready to “dive into peace”, the World Championships tagline. Recently completed her freshman year at Florida State University, Lauren is excited to race in a 50 meter pool this summer and will be competing in the 100m and 50m freestyle.  Brett, arguably Cayman most accomplished swimmer who along with brother Shaune made it to the semi-finals of the London Olympics in the 200m freestyle, will also swim the 50 meter freestyle in his bid to qualify for Tokyo 2020.

The team of Embury-Brown, Hew, Crooks and Fraser will complete the meet with an exciting mixed 4x100m freestyle relay on the final day of competition. The Cayman Islands team will be led by CIASA Technical Director Bailey Weathers and assisted by team manager Sandy Hew.

Event schedules and results can be viewed at the following link:

A live video feed can be viewed at the following link, or install the FINAtv App on your smart device:  https://www.finatv.live/en