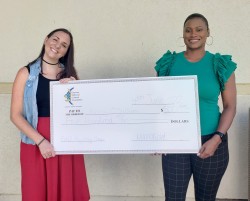 The Cayman National Cultural Foundation (CNCF) has announced Kirsty O’Sullivan as the winner of the 2022 National Playwriting Competition (NPC).  O’Sullivan’s play – Floating Doll – was one of three entries in the category of one-act plays written by individuals aged 18 and over.  The other three categories – full length play written by persons aged 18 and over and skit and one act play written by persons aged 17 and under – each did not have the required number of submissions to be awarded prizes, per competition guidelines.

The NPC gives persons, young and old, the opportunity to share their writing talent to potentially win a monetary prize and have their play produced.  In celebration of the Queen Elizabeth II Platinum Jubilee, a call was made for plays written around the theme ‘Majesty’, whatever the writer’s interpretation of that word might be. The competition was open to all Caymanians and persons domiciled in the Cayman Islands, excluding playwriting workshop tutors, playwriting competition judges and staff of CNCF.

Floating Doll takes place after a hurricane hits the island, and two siblings – Fran and Jonny – are brought together to sort their mother’s home. In amongst the mess the hurricane has left behind, a doll has floated into the home, and they wonder whose it may be and if someone somewhere is crying for their favourite toy. During the play, the audience meets the neighbours and sees the different responses to the disaster, and the deep-rooted friendships that keep the community together. Secrets also come to light and there is also the mystery to solve of how neighbour, Miss Queenie, got her name.

“I am absolutely honoured to have been recognised in this way by CNCF. I have always worked in the arts in one way or the other but am only just finding my feet as a playwright and this was, in fact, my first competition so a big step for me,” said O’Sullivan.

O’Sullivan said the story had been swimming around in her head since she first moved to Cayman and experienced her first hurricane watch.

“I had never had to think about something like that before, and I have been amazed by the kindness and community spirit that emerges each time the island is under threat,” she explained.  “Caymankind is something I have experienced over and over here, and I wanted that feeling to be at the centre of the play - people looking after one another. I also have been told many stories over the years of people’s experiences relating to this and have been touched by the resilience of the people here. I hoped to capture a little slice of Cayman, whilst showing people’s underlying struggles at the same time. Sometimes the strongest people carry the most pain.”

“The National Playwriting Competition was an annual staple in CNCF’s programme calendar until 2004 when Hurricane Ivan put the Harquail Theatre out of commission for three years. We are excited to reintroduce this initiative, which offers writers a platform through which to express their creative voice,” said Natalie Urquhart, CNCF Chief Executive Officer. “We hope to grow the competition each year and to reintroduce workshops to support local writers with an aim to expand the 50-plus Caymanian stage plays that now form part of Cayman’s collection of original literature. Thank you to the six playwrights who submitted their work. We wish them well as they continue to hone their craft.”

The other five entrants in the competition were:

O’Sullivan will receive a $500 cash prize and a trophy for her efforts, as well as the opportunity to have her winning script produced by CNCF and read on stage.